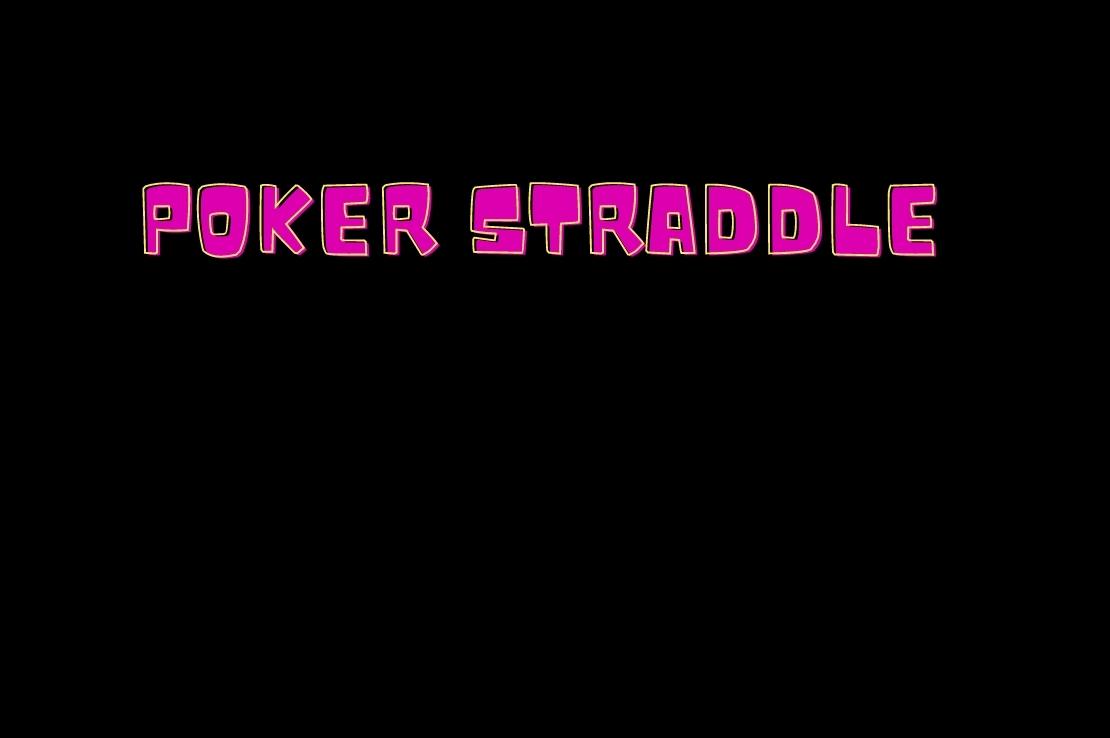 What Is A Straddle In Poker?

Pre-dealt blind bets in poker are called straddles, and they are made voluntarily by the players. Players who straddle effectively buy the big blind and double the stakes when they do.

Straddles are typically two times the big blind, but they can be larger if the regulations of the poker room allow for it.

Let's imagine you're playing No-Limit Hold'em for $2/$3 in a live game. To begin the deal, the player who is down one gun slips $6 in chips in front of them, and the dealer says "straddle" or "live six." Straddling costs $6, which is two times the huge blind in this instance.

Increasing the stakes of the poker game is the primary objective of straddling. To see the flop, you must now call $6 instead of $3, which can cause the pot to rise rapidly.

Preflop betting is identical to that of the big blind for under-the-gun players who straddle.

When it comes to pre-flop action, whoever is to the left of the straddler is first in line to do so. Either that player raises the $6 stake or folds, depending on how things go. The under-the-gun player is the final player to take action. Play resumes in all post-flop betting rounds.

A straddle can be played from any position in most poker venues, while others only allow it from the under-the-gun position.

Double and triple straddles, as well as other variations, are permitted in some poker venues. In other words, if a player under the gun straddles for $6, the player directly to his left can double straddle for $12, and so on.

Why Straddling In Poker Is Generally A Bad Idea

An obvious reason for this is that you're playing against the rules of winning poker strategy by placing a blind bet with an unknown hand. In poker, hand selection is critical, especially in the early stages, such as when you're under the gun.

From under the gun, several casinos have restricted straddling to those who have a tighter hand selection to win. Under-the-gun straddles like 7 2 or J 3 are generally not a good idea because you'll be looking down at hands like these.

Since most No-Limit Hold'em cards should be folded preflop, raising the blinds is a bad idea.

At the poker table, starting hands and post-flop action can be very different when a player has a 50-big blind stack.

The purpose of a Poker Straddle is to acquire the advantage of going last before the flop by cutting out of the line. If you can't figure out how a poker straddle works or if it's even allowed in your current game, you're out of luck. Even if it has a valid and important purpose, the more recent (and many veterans) players will be confused by it.

Let's take a look at some examples of straddling and see how it affects your poker strategy in various games, as well as some of the poker straddling regulations.

Rules Of Straddle In Poker

A player under a lot of pressure will use this type of straddle. Even though the individual in issue will raise their bet to the magnitude of a standard raise, it will not convert into a blind all on its own.

If you're playing live, you'll have a base stake, but you'll also get to act again when it's your turn. This is called straddling. This is when you have to come up with new strategies for raising and other possible actions even though Texas Hold'em poker.

To the left of the straddle is where the real action takes place in poker games. Players who are straddling their positions will have an opportunity to raise a second time when the play goes back to them.

The person on the left of a straddling player can re-straddle by lifting the straddle, depending on where you're playing. An advantage in double-straddle poker is that the blind bet made by another player pre-flop is worth twice as much as the first player's original straddle. Fortunately, this is something that only one person can accomplish at most venues. The majority of poker straddle rules differ from one establishment to the next.

The flop game will be your first challenge. This isn't available in any other form. The person to the left of the big blind who is in the worst possible circumstance (and hence under the most pressure) has the option of straddling.

If the wager is made, it will be made in front of everyone's ears. Most poker straddle rules state that it must be done before the cards are dealt. In some cases, it must be done before the player gets a chance to see his or her cards. Again, this is a matter of house policy. In terms of wagering, you're looking at another, albeit minor, blind spot. Because of this, you're going to double the size of the large blind and set the tone for the rest of the hand by doing so. Depending on the new blind, players must call or fold, but the base raise level does not change.

Are there any benefits to playing with your hands crossed? Because of your pre-flop position, if you're the player that enjoys a little bit of an advantage, you get another opportunity to make a move. From a certain vantage position, this gives you a slight advantage. While it's not a great decision, pre-flop can help you with your hand strength.

Things become easier as you get beyond the scope of the problem. Everything goes back to normal when you make a winning bet. If you can handle the fundamentals, straddling will be a breeze.

3 Common Types Of Straddle In Poker

If you plan to employ straddling as part of your winning strategy, you must first check the house regulations. Not all poker rooms allow for it, some do but specify from which position a straddle play can be generated, and most online poker rooms do not allow for it for the same reasons.

3 Common Types Of The Play You Will Come Across:

UTG Straddle: This is a well-known play that we've talked about before. Before the cards are dealt, the UTG player doubles the large blind. At that moment, they serve as the final preflop.

It's easier to play the Mississippi Straddle than it is to spell it! It gives any player, regardless of position, the opportunity to take the straddle. They have the option of straddling any preflop sum they wish. They gain the advantage of acting last before the flop by making this play (accepting another player does not re-straddle, but this is more typical). The button is usually responsible for this action. This type of straddle, like the UTG play, should be taken up before the deal.

Uncapped Straddle: As the name implies, the size of the stake is not restricted by the "twice the large blind limit."

When Can Straddling Be a Good Idea?

The straddle is not a play to be used lightly, and it's completely acceptable to never begin one. However, in the following situations, straddling may be advantageous.

If you're at a loose passive table, number one. If you have numerous opponents that are prone to calling loose preflop and then folding to aggression post-flop, straddling could be a successful strategy. You may employ the straddle to build a large preflop pot, then take advantage of passive opponents with aggressive post-flop bets with this table dynamic.

The disadvantage of multiway straddled pots is that you'll have to make hefty bets after the flop because the preflop pot is already huge. This is not a plan for the faint of heart.

2. If the entire group is straddling. If you're seated at a table where everyone is straddling in turn around the table, it's probably advisable to do the same when it's your turn.

On the plus side, you'll be playing at a meaty, action-packed table with plenty of chances to win money. The disadvantage is that if you're not used to playing games like this, you can feel out of place.

3. If every single person is a nit. Your straddle could be the catalyst that gets the action rolling at a very tight table. Perhaps you can get an advantage by forcing nitty players out of their comfort zone.

But be warned: never straddling is preferable to doing so frequently.

How Does a Poker Straddle Affect the Game Dynamic?

Straddling is a common strategy used by poker players to increase the amount of action at the table. When it comes to general table dynamics, regular straddling help.

Players who aren't familiar with the straddle will find it challenging, to say the least. Staddling is a rare move in poker and even experienced online players can be intimidated by it.

Players with moderate to decent hands such as lower pocket pairs and suited connectors are more likely to fold in the event of a straddle in play. You can either call or three-bet if you're playing behind a straddle instead of a raise first in (RFI).

From the button or any other position, certain poker venues allow players to straddle. A Mississippi Straddle is the latter.

Using these straddles alters the way a preflop play is conducted.

In this $1/$3 game, let's say the button placed a $6 straddle bet. Preflop action will either begin with the under-the-gun player or the small blind (located directly to the left of the button). This depends on the house rules. The first player to call with a bet of $6 can either raise the bet or fold. If no one raises their hand, play will continue around the table, but the button player will be left out.

Assume, for the sake of argument, that the player in the short-handed position calls the $6 after the cards have been dealt. The cutoff player calls as well, and the action shifts to him. If the button isn't pressed, the action would go straight to the little blind. After both blinds have folded, the button has the option of either checking or raising the $6 bet, which would be the final action.

The straddle is a difficult concept to master, yet it is an integral component of the live poker experience. Although you should never initiate a straddle yourself, you should be aware of how it works when others do.

1. What Is A Texas Holdem Straddle Bet?

In poker, a straddle is a blind bet placed before the flop, similar to the small or big blind. The straddle must always be larger than the huge blind. The game you're playing determines who is allowed to post a straddle and how much they must post.

2. How Does A Mississippi Straddle Work?

3. When Am I Allowed To Straddle In Poker?

4. Is It A Good Idea To Post A Straddle?

A straddle is an optional blind bet, unlike the SB and BB. This means you're not required to post it, and there's no incentive to put money into the pot before checking your cards if you don't have to. Straddling is essentially gambling, and there is rarely a compelling reason to do so. I don't encourage straddling unless you're trying to get the other players to work harder than you are.

5. At a poker table, is straddling a raise?

Although a poker straddle increases the effective stake, it is not a raise. A straddle is the third blind, meaning that the player in the straddle can act even if the other players have merely called their bet. A raiser does not have access to this privilege.