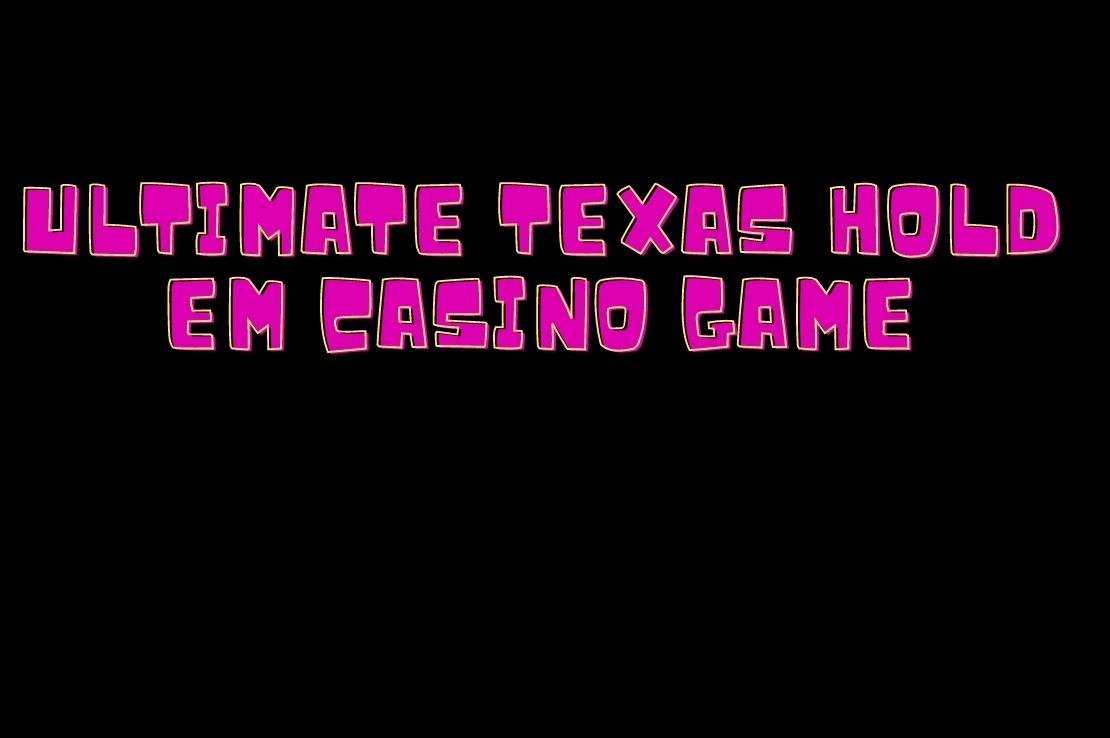 One of the most played table games in casinos is Ultimate Texas Hold 'em, which follows many of the same rules as standard poker. Many gamers like it because of this very reason. Ultimate Texas Hold'em was created by Roger Stone of Shuffle Master, and similar formats are also known by other names, such as Heads Up Hold'em, which Galaxy Gaming distributes.

Keep reading to get the Ultimate Texas Hold 'em lowdown and the best strategies for minimising the house edge.

Ultimate Texas Hold 'em can typically be played in a casino with a maximum of six players and one dealer (also known as the house).

Each player uses a standard 52-card deck in the game. If you're looking for a one-on-one challenge against the house, you can find plenty of "heads-up" games online.

Before a hand can begin, each player must put up the ante and the blind. Requirements and Caps are Clearly Posted. In both cases, your bet will serve as the foundation for subsequent wagers in hand, so keep that in mind.

So, to maximize the effectiveness of your initial capital, we advise starting with the smallest possible bets. Once you've found the sweet spot in your game, you can increase your bets as you see fit.

We'll also discuss the Trips bet, a pre-hand wager that can be made in some casinos but not others, and other supplementary wagers available before each hand is dealt.

After the ante and blind wagers are made, the dealer and each player receive two cards.

How To Play Texas Hold'em Ultimate?

A player must make two bets at the beginning of a hand: an ante and a blind. After that, two cards are dealt face down to each player and the dealer. After considering their cards, the player can choose to check or raise their bet by three or four times. The pre-flop betting round is over, the dealer has revealed three community cards, and the player may now check if they did not make a bet before the flop or increase their bet to twice their ante. For the player who has already raised before the flop, the rest of the hand is a matter of patience.

After this round concludes, the dealer reveals two more community cards, and if a player has checked throughout, he or she must now either match the ante bet or fold. At this point, anyone still in the game reveals their hand and shows it down to the dealer. It's important to remember that if the dealer doesn't have at least a pair, the players win the blind and raise but push the ante. However, in the event of a showdown between the dealer and a player, the latter will always be paid out. So goes a basic Ultimate Texas Hold'em hand.

The trip bet is another type of wager that can be made. Because this is a side bet and not a competition with the dealer, it makes no difference what cards they have. Instead, to win a trips bet, you need to draw to a straight, flush, or straight flush.

Ultimate Texas Hold em's gameplay mechanics are easy to grasp. The river is the point at which all remaining cards are revealed, and winners are determined according to the established Hold 'em protocol.

Payouts can be complicated, so to help you get started, here is a quick rundown of the essentials.

In order for the players to win, the dealer must make a qualifying hand, just like in many other types of casino poker. Any pair is good enough to advance within Ultimate Texas Hold'em. If the dealer does not qualify, the player's ante bet is returned to them without any winnings.

When a hand begins, all you have to put into the pot is the blind and the ante. You'll have one ante by showdown in the 'Play' field (unless you decide to fold). Each wager made during the hand will be reflected in the 'Play' total.

If you win the hand and the dealer has the qualifying hand, your ante bet, and all Play bets will be paid at 1:1.

The blind bet you made at the beginning of the hand is still active and must be responded to.

If you win against the dealer, you get your blind bet back in addition to whatever else you win. However, if you beat the dealer with a straight or better, the blind bet will be paid according to the Ultimate Texas Hold'em payout table.

If your hand is higher than the dealer's, your blind bet is a push and you receive no payout, or it pays out a bonus based on how well your hand did.

Bets on Trips in Ultimate Texas Hold 'em are entirely discretionary, and they aren't the best option from a purely mathematical standpoint, with the house edge hovering around 1.9%. Still, they have the potential to be a great deal of amusement and a refreshing injection of energy into your meetings.

You will win a payout if you have a strong hand, such as three of a kind or better.

Obtaining a royal flush with your two hole cards and the first three community cards is required to win the entire progressive jackpot. In most jackpot games, the payout for a straight flush is 10% of the pot, etc.

A fantastic take on the classic poker game in which you compete directly against the house is Ultimate Texas Hold 'em. You need to know the rules of the game before you can play. In this variant of poker, you'll be pitted against the house rather than your fellow players, and you'll have to make a bet to stay in the game. You'll need to make an "Ante" wager before the system makes a "blind" wager for you. After the betting round is over, the dealer will give each player and himself two exposed cards and two hidden cards. The dealer will pause for a moment before placing three face-up community cards (the "Flap") in the center of the table. The dealer will pause for a moment longer and then proceed to deal out two more community cards (the "River"). You must use community cards to compete against the dealer and make the best possible five-card hand. You have the option to check or continue playing during the brief breaks. At any point in the game, you can choose to increase your Ante bet by one unit, or you can "check" and keep your original wager in place. If you up the ante early, you have a better chance of coming out ahead when the dust settles.

Playing against the house rather than other players is the main draw of Texas Hold 'em, a popular poker variant. You can always expect to see a hot dealer waiting to get the game going when you load this app. The dealer will always greet you with a smile and a good luck wish after you make a wager. At this private table in Evolution Gaming Studios, both the dealer and the players enjoy a VIP experience. You can watch other live games being played at nearby tables and dealers. Beautiful gold-lit panels surround the area where the live game is being played. In addition, you'll find the studio's ambiance to be soothing, making it easy to focus on the dealer.

Ultimate Texas Hold'em poker, just like all of the other live games offered by Evolution Gaming, can be played on a variety of different devices, including desktop computers, mobile phones, and tablets. When compared to mobile displays, the display range of a desktop gaming monitor is superior for this game. Additionally, you'll learn that the space bar and number keys on the desktop display can be used to control the game, making it simple to play. The gaming experience on a mobile device's screen is identical to that on a desktop, except you won't have access to the numeric keypad. Both landscape and portrait modes are available for use while playing Ultimate Texas Hold 'em Poker. Because of these features, playing this game is always a thrilling experience, no matter where in the world you happen to be at the time.

Ultimate Texas Hold 'em is a great game to play at online and live casinos, whether you have a few minutes to kill or are looking to put in some serious work.

The rules can be picked up quickly, and the game's strategy can be mastered to the point where the house edge is cut to around 2% in the long run.

It takes more than just skill to become a consistent winner in this game, but the chances of having winning sessions and going on runs that net you a significant sum of money are higher than in many others.

Since the trip's bet is merely a side wager, the house edge is naturally much higher than in the main game. If a house edge of more than 3% doesn't bother you, by all means, give it a shot. A straight flush at 500:1 is very appealing.

2. Is Ultimate Texas Holdem a game you can win?

Because of the house edge inherent in Ultimate Texas Hold Em, the short answer is "no." The house edge can be reduced to a very respectable 0.53% using a perfect strategy, making this game one of the best in the casino (if not the best) outside of the game of Black Jack.

3. Where can you find Ultimate Texas Hold'em?

The quick response is "yes." Ultimate Texas Hold'em's decision-making phase occurs after the cards have been dealt, making it possible to employ a basic strategy to increase your chances of winning by minimizing the house edge. Depending on your hole cards, how and when to raise is a staple of the basic strategies.

5. Is Ultimate Texas Hold'em a game that can be played online?

Sure, go for it. Many internet casinos feature Ultimate Texas Hold'em. There are even live dealers at some of them. This means you are linked to a physical casino floor, complete with a live dealer, table, and cards, even though you are playing from the comfort of your home.