Rules of Poker: The Official Rules for Playing Poker 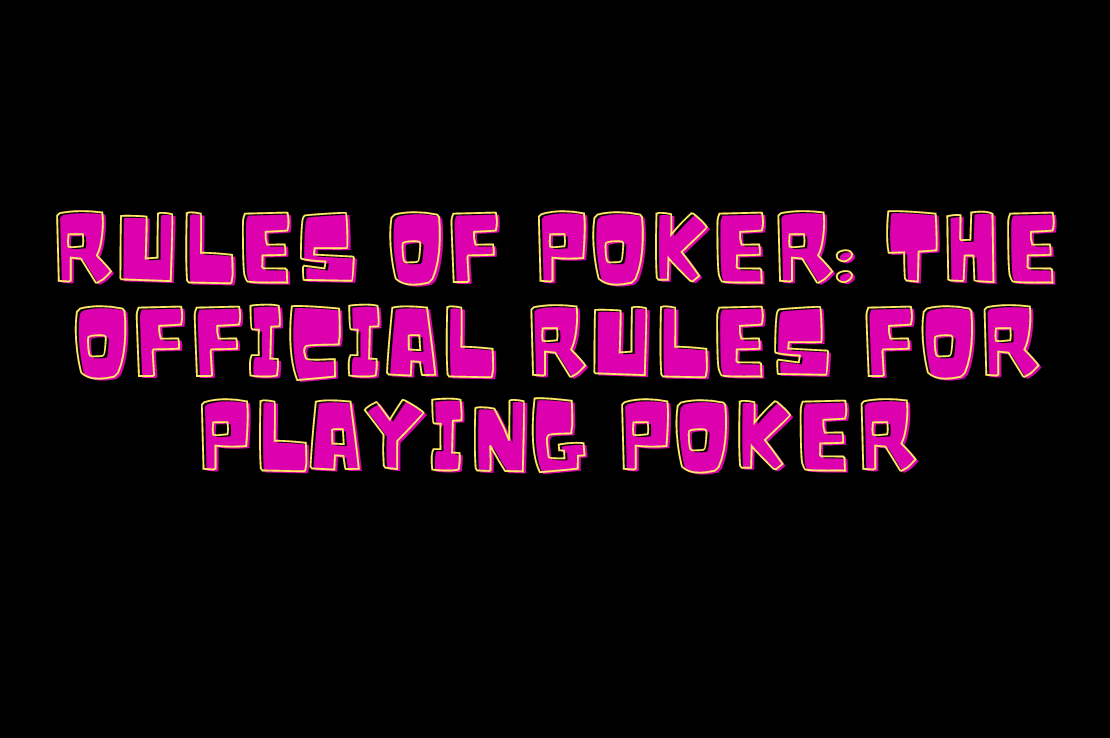 Rules of Poker: The Official Rules for Playing Poker

What Exactly Is Poker?

Poker is a card game with a strategic and operational element and a random aspect in which players compete for a prize pool in the center of the table that is awarded to the player. Who obtains the best combination of cards or successfully induces opponents to "withdraw" (pass) from the game before the end. The legal concept of poker as a game of chance is still up for discussion. The presence of a random variable in the game does not automatically make it a game of opportunity in the traditional sense. Similarly, using money as a tactical weapon (accurate or portrayed by chips) does not make it a pure game of chance. In deciding game success, the player's skill, whether tactical, strategic, or psychological, takes precedence over chance.

The poker played in casinos and on the internet can be divided into three categories: "draw poker," also known as closed or covered poker; "flop games," also known as free or open card poker; and "stud poker." Texas Hold 'Em, Seven, and Five Card Stud, Omaha High, Omaha High / Low, HORSE (a combination of different variations), and Razz (a seven-card Stud) are some of the most common variants.

The Rules Of Poker

Let's say that in order to illustrate how to play poker, we'll use the American variant of the game - Texas Hold'em Poker - for both the deck of cards and the value of the variations.

The Game of Cards is a card game that is played with a deck of cards. A classic French 52-card deck is used in American poker variants. As a result, jokers are not included. Instead, the cards are divided into four "suits" of 13 cards: hearts, diamonds, clubs, and spades. Nine cards numbered 2-10, three face cards (Jack, Queen, and King), and an Ace make up each suit. In ascending order, the card values are 2, 3,... 10, J (jack), Q (queen), K (king), Ace. It's worth noting that, unlike many other games, all of the suites have the same value! As a result, an Ace of Hearts is the same as an Ace of Spades or any other suit.

The Goal of the Game The aim of any poker game is to win the prize pool in the center of the table, referred to as a pot in poker jargon. Each game round's pot is the sum of money or chips wagered by players. The pot can be won in two ways: forming a five-card combination of more excellent value that beats the opponents' combinations or by convincing all other players to fold or leave the game before it ends.

In brief, here's how to play poker. We'll also mention famous Texas Hold'em variant in this section, from which we'll get our official poker rules. Please refer to the relevant definition in the list on the right for the other versions. Every player is dealt two cards, known as "pocket cards" or "personal cards." Only the player who got them will see them. Then, each player determines, in turn, based on a stochastic calculation (but not only), what action to take in order to win the round (the hand) or save money if this target seems unattainable.

Then, In A Clockwise Order, Each Player Can Choose To:

a) Bet: putting some money in the center of the table (which will add up to that of the opponents and form the prize pool for which you play) in order to force your opponents to "pay" the same amount to continue playing.

b) Pass (Fold): pushing your cards to the center of the table, giving up playing further but also avoiding having to put more money into the pot.

c) See (Call): "pay" an amount equal to the amount wagered by previous players so that you can continue playing - this money will also add to the pot in the center of the table.

d) Raise action that consists of seeing the bet made by previous players and adding more money so that they are now having to decide whether to pay again to play. 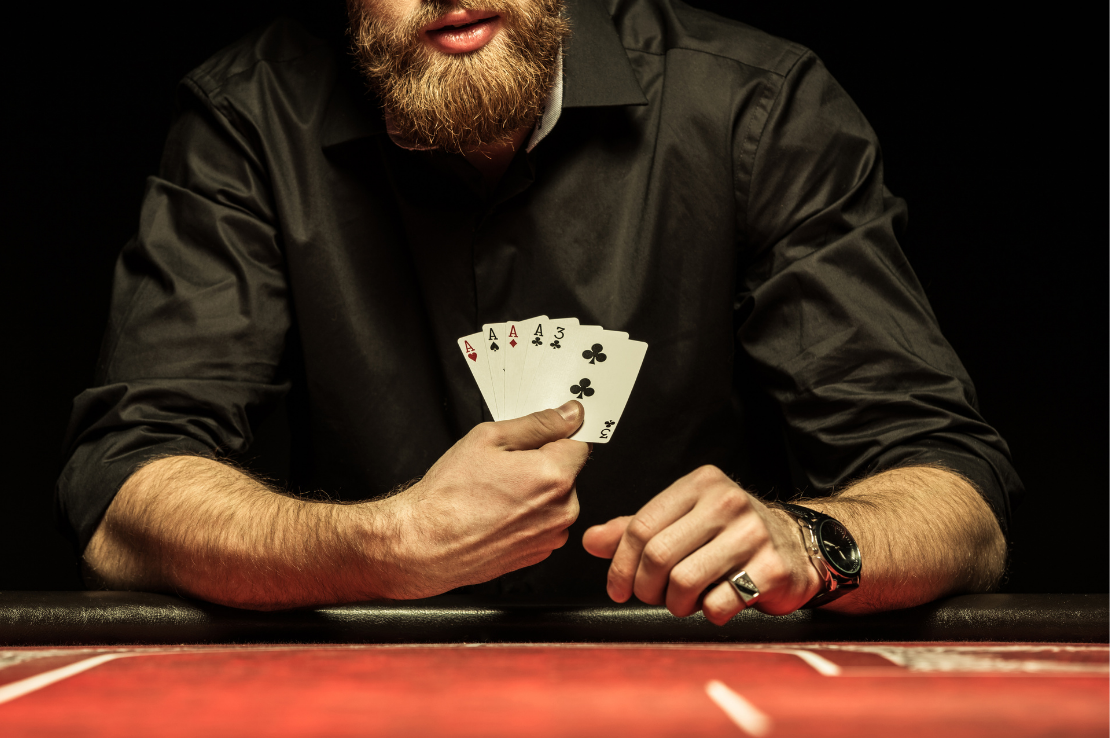 How To Play Poker: The Hands Of Poker

By "hand" in poker, we mean both a game round - the one that goes from dealing the cards to winning the pot by a player - and the combination of cards made by a player. In this section, we will consider the "hand" in this second meaning. The hands are made up differently depending on the variant being played.

In Texas Hold'em each player receives two personal cards (not visible to the other players) called "pocket cards," which he can combine with the five community cards that make up the "board" arranged face up in the center of the table. The hand must consist of five cards and the possible combinations are two pocket cards + 3 of the board; 1 pocket card + 4 of the board; all five cards on the board, and none of the personal cards.

(9-Hearts) (8-Hearts) (7-Hearts) (6-Hearts) (5-Hearts)- consisting of five cards of the same suit in sequence (except the sequence Ace - 10, which is the Royal Flush). The highest value straight flush will therefore be from K to 9. If two or more consecutive colors are made in the same hand, the winner is determined by the straight that includes the highest value card. A King straight flush, like the one in the example above - K to 9 - wins against a Queen straight flush - Q to 8.

(8-Clubs) (8-Spades) (8-Hearts) (8-Diamonds) (6-Hearts)- consisting of four cards of equal value plus an extra card. If, in hand, several players make a four of a kind, the one consisting of cards of higher value wins. If the four of a kind made by different players in the same hand are the same, whoever has the fifth card with the highest value wins.

(9-Clubs) (8-Clubs) (5-Clubs) (3-Clubs) (2-Clubs)- consisting of five cards of the same suit but not in sequence. If two or more players make a color in the same hand, the winner is decided by the highest value card that makes up the color. In order to determine the winner between two colors, the suit has no value. If the highest cards of two colors are equal, the color with the second-highest value card wins, and so on up to the fifth card.

(J-Diamonds) (10-Diamonds) (9-Clubs) (8-Spades) (7-Diamonds)- consisting of five cards in sequence but not all of the same suit. When determining the value of a straight, only the value of the highest card composing it counts.

(A-Spades) (A-Clubs) (A-Diamonds) (10-Hearts) (5-Spades)- consisting of three cards of equal value. The other two cards in the hand are irrelevant and unrelated to these. The two remaining cards are used to decide the winning hand between two tris of the same value. In this case, the player who has the fourth-highest value card wins. If, for example, two players make a set of Jacks and player A makes J - J - J - 9 - 6, and player B closes a hand with J - J - J - K - 2, it will be this second player to win the dish.

(A-Spades) (A-Hearts) (9-Hearts) (6-Spades) (2-Clubs)- consisting of two cards of the same rank and three other unmatched cards. To decide which is the strongest of two hands that have closed a pair, we evaluate the value of the pairs themselves and, if they are equal, the value of the first highest card. If there is still a tie, the second-highest card will be compared and so on.

(Q-Diamonds) (J-Spades) (5-Spades) (4-Hearts) (2-Hearts)- consisting of 5 unmatched cards. The value of such a hand is determined by the highest value card. If two players have only made hands with the Highest Card and they are equal, the second-highest cards are compared, and so on.

The First Game Of Texas Hold'em Step By Step

Once the ten seats at the table have been taken the game will begin.

The action starts after the assignment of the role of dealer to a player, indicated by the "D" (dealer) button. To two other players (who occupy the place immediately to the left of the dealer and the one following) of the said places. "small blind" and "big blind" which will have to make the first forced (forced) bet - these in English are the "small blind" and the "big blind.”

Two cards are dealt to each player. The player immediately following the one playing the big blind (the big blind) is the first to act, and then clockwise the others will play.

The "Flop": three community cards are dealt face up (ie, facing up) in the center of the table. Any player at the table who has not "passed" in the previous round can now use these cards to improve their combination, a game of betting will follow. If no one bets you can simply check and see the next card without depositing more money into the pot. A bet can be called (i.e. covered by depositing the same amount) or raised if you intend to see the next card otherwise you will have to fold.

The "River": a fifth and final community card is dealt face up. At this point, we will witness the last episode. If the bet made by a player is seen (covered) by at least one other, both players must show their cards (the so-called "showdown") and the winner will be decided.

If at any stage of the game, the bet made by a player will not be seen by anyone else, the one who has bet will take the entire amount of the pot; he will also have the right to decide whether to show his cards or simply return them to the dealer.

Once a winner is established, a new "hand" begins and the dealer button will advance one position clockwise. The opening bet will usually increase after a certain period.