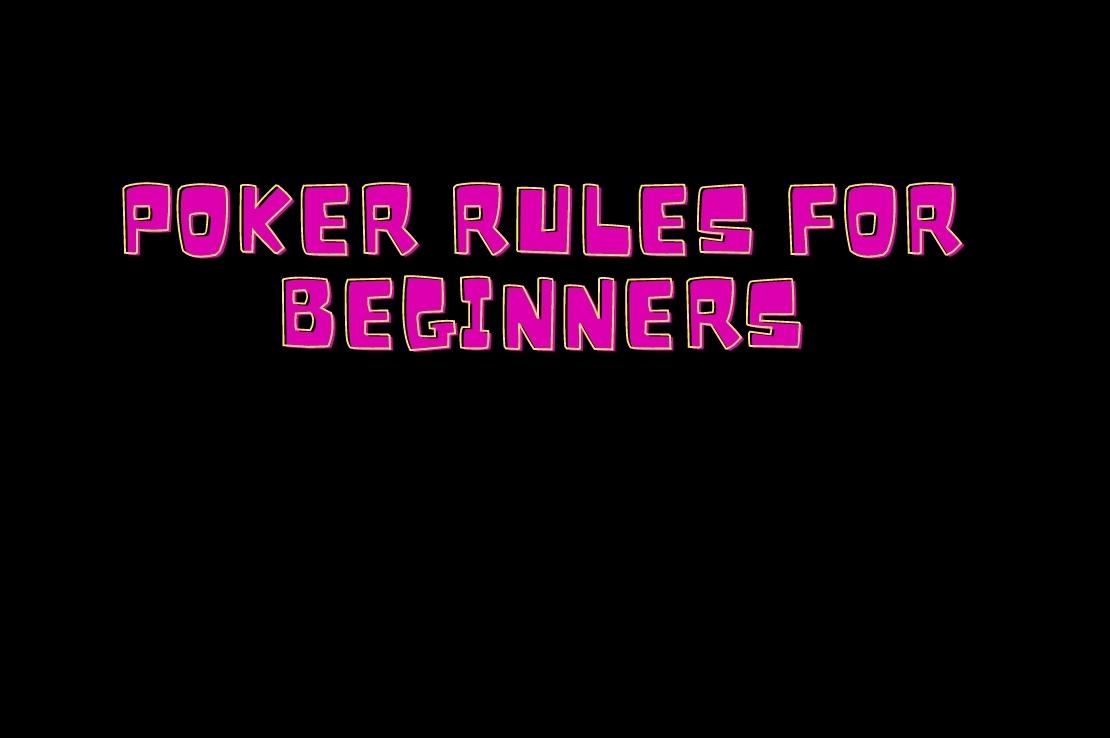 Learn the rules, positions, and poker hand rankings before you start playing poker. As a matter of course, this is the first action you should take. While mastering the basics of the game of poker is simple, you should take the time to grasp how the cards in a poker hand are ranked. There is no need for you to be in a situation where you are in the middle of the hand and have to decide whether or not your flush can beat a straight.

Many individuals are surprised to learn that learning the basics of poker is not quite as difficult as they believe. Stud Poker and Draw Poker are the two most common varieties. This page lists the rules for both games, which are nearly identical.

Each player in Stud Poker receives five cards (or seven for some games). Players then evaluate the strength of their hands and place bets based on that assessment. Only if another player is prepared to match the player's bet can one person win. Afterward, the two or more players that are left will have to reveal their hand. All the chips are awarded to the player with the best hand.

Each player is dealt five cards in Draw Poker, and a betting round follows. The remaining players can then try to strengthen their hands by exchanging up to three cards for a fresh set of three cards from the deck if they so desire.. Having an Ace allows a player to swap all four of his other cards.

This is how the betting works: Four possibilities are available to each player starting from the dealer's left:

You can fold your cards if you believe your hand isn't strong enough to win or if you prefer not to place the additional bet. It's impossible for him to win the hand, but he won't lose any more money either.

Players must select whether or not to raise the stakes once more or fold their hands, or if they will call, which means they will gamble the same amount of money as the player who raised.

No one has raised the stakes, so players can choose to stay still and not bet if they like. This choice is called a "check."

Despite the fact that there are many different types of poker, the rules are nearly identical. Each player receives a hand of five to seven cards. a player's goal in five-card poker is to create the best possible five-card poker hand (see below). There is a hierarchy of hands in every poker game, and the best hands are more difficult to get than the worst ones.

A Flush poker is a five-card hand in which all five cards are from the same suit. If more than one player has a Flush, the winner is determined by the order in which their cards appear on the board. A Flush poker has a probability of 0.1965 percent among all poker winning hands.

Five cards of various suits are used, each set in a certain numerical order. In the event of a tie, the highest-ranking card is used to break the tie. A peculiar example is that the Ace can act both as the High or Low card depending on the cards it is put with. The probability of having a Straight poker sequence is 0.3925 percent.

Three of a Kind

A pretty simple configuration that uses three cards of the same rating and two random (unrelated) cards. Tiebreakers are decided by utilising this system. The possibility of acquiring it is 2.1128 percent.

Pair Poker comprises two cards of the same rank, another two cards of some other rank that match each other but not the first pair, besides one card not of either rank.

Besides the matching pair, there are three unconnected side cards. Every now and again, you'll run into this predicament in a game of Texas Holdem or Omaha poker hand rankings.

It can be simply any card that does not fall into any of the abovementioned categories. If none of the previously mentioned poker hand rankings are available, it is the most effective way to break a tie and declare the winner. If the first two cards are identical, then the third card is used. If they're the same, move on to the next one, and so on until you find the better first one.

Three of a kin

A poker hand containing three cards of the same rank in three different suits. The two highest available cards besides the three of a kind complete the hand.

How to Play the Game

Poker regulations will be used as an example of how to play a hand, and the rules will be explained in detail below. Players in No-Limit Texas Hold'em get two cards face-up, known as "hole cards," at the start of a hand. When it's the player's turn to act, they have the following options: bet, call, raise, or fold.

The finest five-card hand can be made from any combination of a player's two-hole cards and the five community cards on the board. A round of "preflop" betting takes place when each player receives their cards. The name of each "street" or "round" is distinct.

"The flop" refers to the first three communal cards that are dealt. The remaining players can make advantage of the community cards to improve their poker hands. A new round of wagering takes place in the middle of the game. The dealer button is to the left of the first player who is still in the hand

Another card, called the turn, is delivered after the final round of betting on the flop (AKA Fourth Street). To form a five-card poker hand, players have access to two hole cards and four community cards.

There is a new round of bets. The first remaining player is seated to the left of the button, and the game begins. Clockwise play is the only way to progress in a game. The betting round is over when all remaining participants have made their decisions.

Finally, we have the river (also known as Fifth Street) as our final trump card. The final bets are placed. During a showdown, players raise their hands to signal the end of the game. In poker, the last player to wager, known as the last aggressor, must first display their cards. The pot is awarded to the player with the best five-card hand, which ends the current hand and begins a new one.

Knowing which hand wins head-to-head when you turn your cards face up is critical in most poker games that use the conventional poker hand ranking system. There are a variety of betting structures that can be used in a variety of card games, including no-limit, pot-limit, and fixed-limit.

Players in most poker games are tasked with creating the greatest five-card poker hands using traditional poker hand rankings in order to maximize their chances of victory.

The following hand rankings apply to most poker variants except for a few lowball games. A royal flush is the strongest hand, followed by a straight flush, and so on until you reach a high card, which is the weakest.

Showdown hands, such as four-of-a-kind and straight flushes, are generally the best possible combination when the cards are dealt.

These cards are dealt out one by one by the dealer to each player in turn, beginning with the player in the small blind. The player who has the hole cards must keep them face down the entire while the game is being played so that no one else may see them.

The first of four rounds of betting begins after each player has two hole cards. During a round of betting in Texas Hold'em, the preflop, flop, turn, and river are referred to as such.

Immediately following the preflop betting round, the dealer deals three cards face-up to each player on the table. These cards are known as the flop. A fourth card (the turn) is dealt with following a round of betting by all active players. Before the fifth and final card is dealt (the river), there is one more round of betting. After the turn of the river, one final round of wagering takes place.

Afterward, all remaining players reveal their cards. The showdown is the part of the hand in which the best hand wins according to poker hand rankings, and this is known as a showdown.

With a few crucial differences, Omaha Hold'em (commonly known as Omaha) is a game similar to Texas Hold'em.

The goal of Omaha, like Texas Hold'em, is to get the best possible five-card hand by combining your hole cards with five community cards.

Instead of two hole cards and three community cards, players in Omaha are dealt four and are required to create a five-card hand using exactly two of those cards. These rules are distinct from those of traditional poker games like Texas Hold'em, which allow players to build the greatest five-card hand using whatever combination of hole cards and community cards they can find.

Regular Omaha and Omaha Hi-Lo are two of the most popular Omaha variants played around the world (aka Omaha Eight or Better).

Pot-limit or limit betting rules are the most common in Omaha Hi. Check out our Poker Betting Rules page for more information on the various poker betting systems.

As the second most popular poker variant after Texas Hold'em, Pot Limit Omaha is often known as "PLO."

These are the most critical poker advice for beginners to follow. You'll be able to pick up poker strategy faster and avoid many of the blunders that other players make.

1. How long does it take to learn to play poker?

Poker is a game of cunning. Mastering poker is a never-ending process that demands regular planning and learning new tricks of the trade. The basics of poker can be learned in under 5 minutes. As a result, it's reasonable to state that while the game is simple to pick up, mastery takes years.

2. What is the most straightforward poker game to master?

Texas Hold'em is the most user-friendly poker variant. Not only is stud the most widely played kind of poker, but it is also the simplest to learn and master.

3. In Texas Holdem, how much money do you start with?

Playing Texas Holdem doesn't need you to have a certain sum of money in your bankroll. To encourage new players to sign up, the majority of online poker rooms now provide a free registration bonus.

4. In poker, which suit has the highest ranking?

Hearts, diamonds, and clubs are the next highest-ranking suits in poker after spades.

5. Is poker a viable source of income?

Is it possible to win a large amount of money playing poker if you play by following a well-thought-out strategy? As a result, an increasing number of people are considering making a career out of poker.